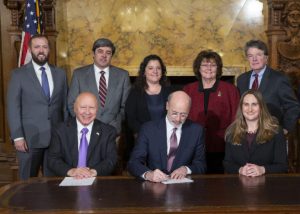 For the first offense, in addition to paying a fine, offenders are court-ordered to pick up litter or trash from 5 – 30 hours. For second and subsequent offenses, the community service increases to 30 – 100 hours as an optional addition to the monetary fine.

Act 62 denotes certain segments of roads as Litter Enforcement Corridors as a way to increase focus on litter and illegal dumping. These road segments are ones that have a high aesthetic or historic value worth preserving and will be marked with signs to notify motorists.

Pennsylvania communities are already putting the new bill into action. The city of Philadelphia recently designated more than 50 blocks of roadway as litter enforcement corridors. Among other penalties, a contractor found guilty of dumping in one of these corridors could now be penalized three times the maximum $5000 fine.

Doubled fines
The act adds section 3329 to Title 75 (vehicle code) which doubles fines for depositing waste in a litter enforcement corridor. These offenses are defined under the following 3 sections:

Tripled fines
Often, fines levied against commercial dumpers are less than the fees for proper disposal. Act 62 helps remedy this by tripling the fine when waste or litter (as defined in the crimes code section 6501) that originated from a commercial business is deposited in a litter enforcement corridor.

Act 62 also added a safety measure for workers or volunteers who are picking up trash in a litter enforcement corridor, under section 3329(a). When drivers are in these areas and see traffic control devices, they must yield the right of way, like in a construction work zone. For this reason, it’s important to plan a cleanup event with local or state authorities involved when possible.

How corridors are designated

Scenic highways, as defined under Title 74 chapter 83, are now designated Litter Enforcement Corridors. There are 3 additional ways roads can be designated (section 6105.2 of the vehicle code):

For a complete list of guidelines for state routes, see PennDOT’s Roadside Beautification Manual. For a state route to become a litter corridor, the District or municipality shall: